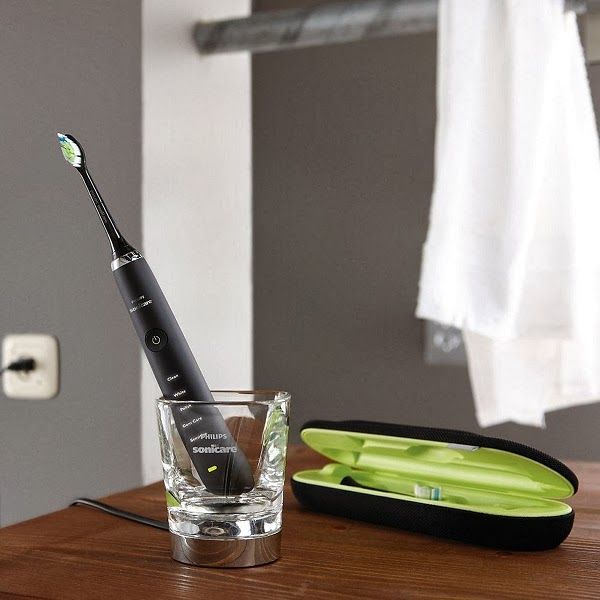 As many brace wearers will testify, keeping your teeth clean whilst having braces is quite a commitment. Your usual 5 minute morning and evening routine will quickly turn into an extended session in the bathroom brushing, flossing, poking and generally trying to remove any evidence of your last meal whilst remaining intrigued as to just how many hiding places food has to cling to with the simple addition of a few brackets and wires.

Early in 2014 I threw caution to the wind and purchased a Philips Sonicare Diamond Black electric toothbrush after reading some very favourable reviews on Amazon.  This toothbrush is not cheap, the RRP is listed as £250 which is a lot more than I actually paid taking advantage of a discount that brought the cost to below £100.  This is still a lot of money so was it worth it?

Well the answer is definitely yes, I have been delighted with this toothbrush and really can’t do without it if I find myself unexpectedly away for a few days.  The toothbrush is very effective at keeping my teeth clean and I found hard to deal with stains soon disappeared and my teeth, brackets and wires appeared to be very clean after each use.  It is quite a powerful toothbrush so if you have not used an electric toothbrush before, may find it taking a couple of weeks to get used to the sensation.  The toothbrush does gradually increase power over the first couple of weeks but once you get used to it, it isn’t an issue although can be a little uncomfortable after an adjustment when you teeth are at their most sensitive.

To charge the toothbrush, you place it in a glass re-charging jar which is a nice way of doing it but what particularly impresses me is the carry case has a built in USB charger so if you are travelling, you can still re-charge the toothbrush from a variety of sources.  The toothbrush is really nicely designed and feels about right in your hand and the relatively small head is easy to use when you have braces.

In so far as negatives, I have a couple of gripes.  The advertised usage is around 2-3 weeks from a full charge but I have found at best I can get 3-4 days between battery charges.  This is a huge difference between the advertised claims and the actual time so I have often wondered whether my brush was faulty?  There is only one selector button which you have to cycle through to get to the various settings which can be a bit fiddly particularly as your finger rests at this position so I have often found myself cycling between modes mid-clean with no easy way of telling which mode the brush is in.  The final issue is the availability of the black toothbrush heads.  My local store does not often stock these heads and when they do reappear in stock, find they sell out quite quickly.  The replacements heads are quite expensive and don’t last all that long but biggest issue with them is that you can only get the standard size in black.  Philips make a smaller toothbrush head which would be ideal for getting around brackets but these are only available in white which does detract from the overall look of the toothbrush.

So overall, what do I think of the Philips Sonicare Diamond Black electric toothbrush?  Apart from the niggles I have mentioned, I think the toothbrush is brilliant and I would have no hesitation in recommending it to anyone with braces and would happily buy another one once this one reaches the end of it’s working life.

If you would like to support this blog, you can purchase this electric toothbrush through my affiliate link to Amazon here