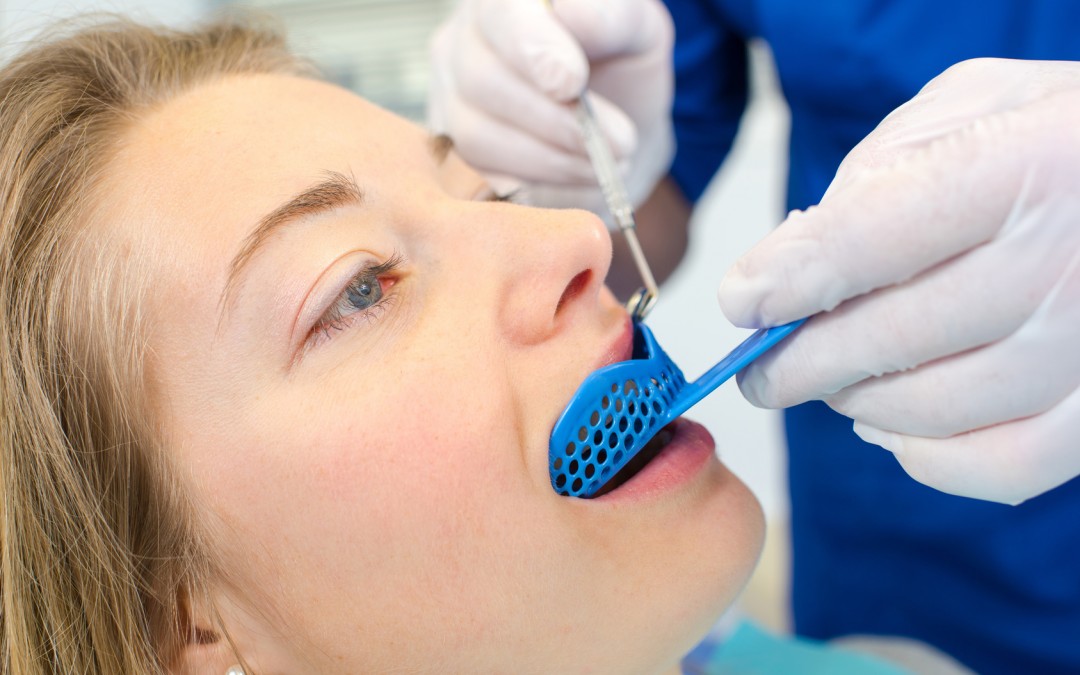 If you’ve had orthodontics, a gumshield or bleaching tray made, or a crown you’ve probably had a dental impression. It seems to be one of the least liked dental procedures, and yet it is a very simple one that doesn’t require drills, injections or anything else usually perceived as scary. My patients have at least two sets of these, one at the beginning and one at the end of treatment, the purpose being to take a copy or print of the teeth. This is cast in plaster in the laboratory so we have a permanent 3D record of the teeth and if needed braces can be custom-made. Impressions are taken using a tray which fits over the teeth. This is filled with a substance called alginate which turns from jelly-like to a firmer rubbery consistency in a few minutes. Most people don’t like the texture, but some people have a pronounced reaction which causes them to gag or feel sick if the impression material is near the back of the mouth. It is this and the lack of control over the situation that causes people to dislike impressions, or even have a phobia of them. Luckily, taking impressions is relatively quick and there are things which both the dentist and the patient can do to make it a less fearful experience.

• First of all, do tell your dentist that you are worried about the process or have had problems in the past as there are steps the dentist can take.

• Thick mix. Mixing the alginate fairly thickly helps it set, stops it running backwards and is more comfortable to the patient. • Less impression material. I make sure to avoid loading too much material into the tray, as long as it won’t affect the quality of the impression I need.

• Talking! I talk to my patients while it is setting to distract them. • Apron and bowl. I give my patients a bowl and tissues, its better for them to dribble into a bowl than to try to swallow! Its also reassuring for patients who think they might be sick that they have a bowl in front of them. Then there are the things you can do while you’re having the impression. I talk my patients through this if they’re worried, and remind them while the impression is setting.

• Breathe! Don’t forget to breathe, but it really helps to concentrate on breathing slowly and through your nose, not your mouth.

• Stay calm. Ok, easier said than done, but do try to stay as calm as possible. • Dribble! See above, you will salivate a bit but its better to dribble than try to swallow.

• Sit forwards. I prefer to take my impressions with my patients seated upright, then ask them to tilt their head down so their chin is on their chest. Some dentists prefer to have the patient lying down, this can also work very well, even though it seems a little backwards!

• Distract yourself. Think about something completely different, wiggle your toes, sing a song or imagine you’re on beach!

Yesterday I removed the braces for a 14 year old girl, Lauren. Although she’d reached the end of her treatment she wasn’t at all excited as she was very worried about the impressions and scared she’d be sick. She almost refused the impressions, which would not have been a good idea as I needed them to make retainers. I talked her through what we were going to do using the techniques above and did a ‘dry run’ with an empty tray and no alginate. She did great, the first one passed without incident and she told me she’d sung ‘Baa Baa Black Sheep’ in her head, but needed another song for the second one. I suggested ‘Twinkle Twinkle’, and in the end I did the singing! We all ended up laughing and I hope she went away pleased to have got over her fear of impressions and less worried for the next time she needs them. In 22 years of being a dental student and dentist I can only think of three times a patient has actually vomited during impressions, and those were when I had no warning of a possible problem. None of those have been since I’d had my own practice, I’ve taken thousands of impressions so I’m pretty good at it now. I always find its never as bad as people fear, think positively and you’ll be amazed.

We are grateful to Dr. Megan Hatfield who kindly allowed us to republish this article from her blog for the site. Wetherby Orthodontics can be contacted at www.wetherbyortho.co.uk