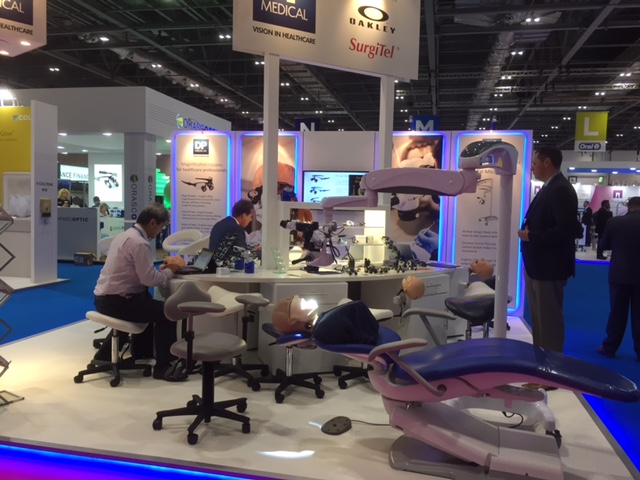 Whilst in London last week I had some spare time so headed to the Excel Centre in Docklands to visit the British Dental Industry Association (BDIA) Trade Show which was running for three days.  The show brings together manufacturers, suppliers of products and services and organisations associated with the provision of dental services in the UK.

The show was much larger than I thought it would be and it took a good hour just to walk around to see who was there and to prioritise who I wanted to spend time talking to.  You could pretty much buy everything required to set up and run a dental practice from chairs, stools and dental furniture, sterilising equipment, materials, tools, financial and legal services, clothing, software, consumables and much more.

There was not a great deal directly linked to adult orthodontics but I did manage to speak to a few suppliers of aligners and other products that would be of interest to adult patients thinking about orthodontics. I also spent time on a couple of stands looking at some impressive new electric toothbrushes and flossers and will be writing about these soon. There were also a series of lectures and talks delivered throughout the day by a wide variety of dental professionals and I was able to attend a few that were of interest.

On arrival I received a bag from one of the sponsors containing information and a show guide and also several tubes of toothpaste. These were the first of several I received throughout the show and by the end had four full size tubes of toothbrush, several sample tubes, a travel electric toothbrush, enough samples of interdental brushes to keep me going for a while, some mouthwash, a wash kit, various pens and notebooks and a couple of fabric bags.

One thing that did get my attention was the great discounts offered to those looking to buy products at the show.  Examples included a portable water flosser for around £10 and one of the very latest bluetooth linked electric toothbrushes for around £200 less than the RRP.  If you are looking to buy products such as these then a visit to a dental show can be very worthwhile.

Overall, it was well worth attending and from the feedback I received from some of the exhibitors, they reported that the event was a success.